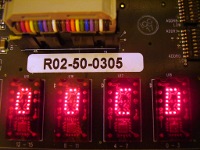 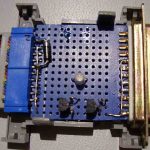 OpenOCD, the Open On-Chip Debugger, is a nice open-source JTAG debugger that supports flash programming and (with gdb) debugging on a wide range of ARM CPUs by utilizing the core’s remote debug capabilities via the JTAG port. To use OpenOCD, you need some kind of JTAG adapter. There are multiple affordable JTAG adapters, most of which are USB-based. Since I had some reservations about the required USB libraries, I wanted a JTAG adapter that works on the parallel port, because the software has direct access to the port without any closed libraries. Because the schematic in Dominic Rath’s diploma thesis was a bit outdated, I decided to roll my own – after all, there is not much magic in such an adapter.
The design goals were:

The adapter can be used with the “wiggler” driver that has been in OpenOCD for a long time. Newer OpenOCD versions support the “wiggler2” driver that drives the activity LED on this adapter.

The important part is the 74LCX245. This octal bus buffer has the feature that it can handle 5V on the inputs even when VCC is at 3.3V or 0V. 74LVX245 from some manufacturers may work as a substitute, but be sure to check the datasheet for the exact part you want to use!

The Adapter was used on multiple IXP420-based boards and on a Net+ARM ARM7 board. Performance when programming a 16-bit AM29LV320 flash is quite good: using the parallel port adapter, programming speed is around ~14KiB/s (compared to ~20KiB/s using an Olimex USB-adapter).